Install a few basics that we need:

Test to verify all is well

Get the docker-compose release and pipe to local file

Now move the file to a location within your path

And make it executable

Fortunately this has been made easy for us thanks to a project on GiHub – so to get the basics running we’d just need to clone one repo:

Move into the directory:

Elasticsearch uses a hybrid mmapfs / niofs directory by default to store its indices. The default operating system limits on mmap counts is likely to be too low, which may result in out of memory exceptions. We’ll need to increase the vm.max_map_count value:

Make it persist across reboots:

Drop back to previous user:

Now lets configure it such that the elasticsearch data (indexes) is held outside of the container – for example:

The default logstash configuration has a TCP listener on 5000, however for my (our?) purposes we want to listen for syslog messages. Now there are syslog logstash inputs around – but “syslog” is not exactly standard, and there are a both of varying RFCs – so instead of using a rigid input – lets use a standard TCP and UDP listener, and have a grok expression do the parsing for us – that way we can tweak if necessary. Most of my syslog sources of rsyslog – so the grok expression I have seems to play nice with that.

Use your editor and open ./logstash/pipeline/logstash.conf and make the contents look like this:

You’ll notice there is provision for if/when grok cannot parse the message, that it will be logged to the host file system at /var/log/failed_syslog_events-. This is useful to look at and see what is failing and adjust the grok expression as appropriate. You’ll also see that port 5000 was selected for syslog – however the syslog standard port is 514 – this is because ports below 1024 require root privilege and I don’t want run logstash as root. Instead we will modify the docker-compose config such that the host will port forward 514 -> 5000.

Lets do that now, use your editor and open `docker-compose.yml’, then configure the ports section of the logstash service as follows, again we will do the restart policy at the same time:

While you’re in there, add the same restart policy for the kibana service

Assumption is you’re in ~/docker-elk directory

Get the docker events to print to the terminal, useful for the first time run/troubleshooting issues:

Start it up ELK in the background:

Verify each of the 3 containers for ELK are running: sudo docker ps and you should see the port forwarding is in place for 514 -> 5000 (both TCP and UDP)

At this point it’s good to wait a few minutes – or until the docker-events die down, as it can take quite a few minutes for the full stack to be up and ready.

Now go to a browser and goto your Kibana instance which listens on port 5601 by default:

You’ll be taken to the Index Patterns page, and so long as the data you pumped it was correct (and all prior steps) you should just be-able to accept the defaults and it’ll create a indexing pattern for you.

Go to the ‘Discover’ page and you should hopefully see the logs shown that you pumped in earlier. If you do – your basic ELK stack with syslog is now functional, and you can move onto getting clients sending their logs to it, and start creating visualizations and dashboards on Kibana.

If the docker-events are annoying – do a

Drop a question/comment and I’ll try and assist.

Use this chart to determine the ‘set and forget’ settings (temperature and pressure) to apply to your kegged beer to properly carbonate it with a CO2 pressure tank. There are a couple of these around on the net, but usually limited to degrees fahrenheit and a few other annoyances for me, so I took a couple of minutes to put together mine own slightly more simplified version. 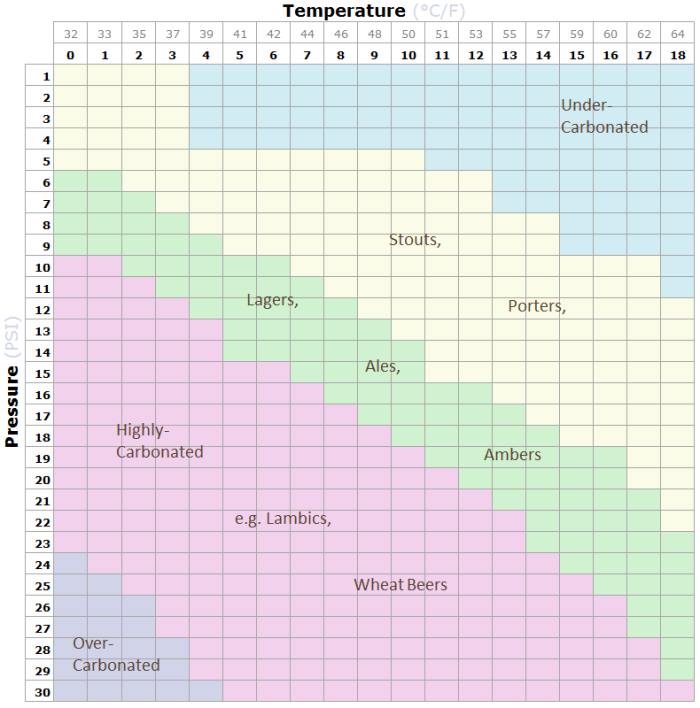 1. Mounted the camera on a tripod in portrait orientation, doing this has two benefits… firstly puts the barrel distortion introduced by your lens on the top and bottom making the shots easier to blend and stitch, also it’ll give your pano more height. The down side of course is that you’ll need to take more shots than you would with landscape to get the same field of view.

2. Put the camera in Manual mode to ensure that the exposure is locked. If you use any of the Auto/Semi-auto modes… your camera will re-meter for exposure for each shot – causing the brightness of each shot to differ.

3. Then I selected a specific white balance, in this case ‘daylight’ – but the important thing is not to have it on Auto White Balance, otherwise each shot is likely to be a different temperature.

4. Next I dialed in the aperture to a tiny (F/22), this is to ensure that I get the deepest Depth of Field (DoF) as possible so the foreground and background are sharp and in focus.

5. Then I used the auto focus to do the focus work for me, then once focus was achieved I switched to Manual Focus to ensure that each shot is taken with the same focus.

6. Finally, using my Canon IR remote I shot off the first shot then carefully panned by tripod head until there was approximately 20% overlap from the previous shot then shot off again… then continued until I had the complete field of view I was after.

I did the post processing on my Linux (Ubuntu) box, as a minimum you’ll need the following:

Here is the process I followed:

1. Converted my RAW images to JPEG using dcraw. I used a custom version of the script available here: http://jcornuz.wordpress.com/2008/07/10/here-is-a-little-something-for-your-blog/

2. Renamed the .JPEG output to .JPG, because Autopano-sift-C fails with .JPEG extensions.

4. Opened images in Hugin, and got it to use Autopano-sift-C to automatically find the control points between the set of images.

5. Hugin then uses ‘nano’ to modify the geometry of the images, then ‘enblend’ to stitch them all together.

FYI – I did run into an issue with the latest CVS version of Enblend (v3.2), and had to downgrade to a previous version to make it work.

Go to “Tools > Application catalogue”, click “New”, enter “matrix” into the “Web Address” field, click “Cancel”. Choosing the red pill will activate the red pill mode, obviously, and chosing the blue one will deactivate it.

I am a big fan of the MS Excel AutoFilter feature, and use it extensively. Every now and then I’m wished that there was some function within Excel to do a SUM function, but only on the rows that are visible as a result of the AutoFilter… well few minutes on Google and a found it.

Use the subtotal function with the relevant function_num, for addition I used 109. For example: =SUBTOTAL(109, A1:A1000)

I find it a hassle to log into my gmail account to do some Google chat, and I don’t want to load the standard Google Talk fat client, so I did some searching and found a useful article explaining how to put the Google Talk gadget in the Firefox sidebar: here

After eventually getting my PS3 to stream music properly from a DLNA server… I was frustrated because I thought is was not possible to listen to the music whilst using other functions on the PS3, such as the web browser. But, then I found (by accident) that if you press the ‘Ps’ button in the centre of the controller whilst in the music interface… it drops back to the PS3 menu and the music keeps playing in the background. nice.

I found that the pre-configured settings for Singapore’s StarHub mobile operator on my Nokia n800 did not work when trying to connect my tablet to my Sony Ericsson (Z800) 3G phone for internet access. After a bit of poking around I got it to work. Here are my settings:

I did not adjust any of the ‘Advanced’ settings.